Following the lead of the United States, Canada and other countries, Italy too has set up an Observatory on Religious Freedom to monitor and combat violations of religious freedom around the world, beginning with the areas at risk where religious minorities are being persecuted. The Observatory was established by the Italian Minister of Foreign Affairs and the City of Rome and is run by a Coordinator, the sociologist Massimo Introvigne and four members: two diplomats expert on Human Rights, Diego Brasioli and Roberto Vellano, and two representative from NGOs: Attilio Tamburrini and Roberto Fontolan.

The initiative was presented on 28 June in Rome at the Foreign Press Association with a speech by Archbishop of Baltimore William Lori entitled “Religious Liberty: God’s Gift to all Nations is our Responsibility to Defend.”

William E. Lori is Archbishop of Baltimore, the oldest diocese in the United States. He also heads the Commission on Religious Freedom of the U.S. Bishops’ Conference created recently in response to the recent clashes with the White House for the the US government’s Health and Human Services (HHS) mandate; under this mandate, institutions would be required by law to provide contraceptive pharmaceuticals and medical procedures for employees, regardless of religious belief.

In his speech Archbishop Lori spoke about the importance of ensuring that religious freedom is rightly understood and protected. Individuals and groups, the archbishop maintains, have the right “not only to worship freely, but indeed to put their faith into practice, both publicly and privately.”

“Violations against religious liberty should alarm us all,” the archbishop continued,“whether one is religiously inclined or not. Something fundamental is being lost in American culture and law. If this loss of freedom does not and will not serve the common good of our nation, or of other nations where bloody religious persecutions are underway, at the end of the day we will be judged by our fidelity to our responsibilities and how we sustain that fidelity.”

“Our responsibilities call us to rally for religious freedom in the context of the national common good, and as a beacon of hope for people suffering religious persecution in many parts of the world,” he said.

Chairman of the Religious Liberty Observatory Massimo Introvigne, who moderated the conference, explained the decision to invite an American archbishop to introduce the initiative, rather than a representative of a country where religious persecution is manifested more with greater force. “Archbishop Lori,” he explained, “has been active in a very important field, a field which should be our starting point: What is religious liberty? And why is religious liberty important? Religious freedom” Introvigne said, “is the very cornerstone of our freedoms and liberties.”

It is important, moreover, to show that violations against religious liberty are happening throughout the world. “It is an alarming trend in recent years” Introvigne continued, “to witness serious problems of religious liberty in the West, in Europe, in North America. And I think we should all be aware that religious liberty is not only a problem in Africa or in Asia. It’s a problem everywhere, and there are some disturbing developments also in the West.” 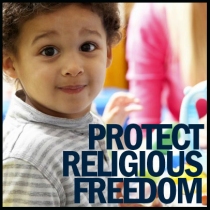 Hungarian Church Law violates the main aspects of all the churches’ and citizens’ rights to freedom of thought, conscience and religion, to due process, to seeking remedies and the requirements of the rule of law, established in the Hungarian Constitution. The ground of the application to the European Court of Human Rights is, similarly, the situation in which the confiscation of right flows from the law itself. According to the application, the law is contrary to the applicants’ rights to a fair trial, to an effective remedy, to the freedom of thought, conscience and religion and breaches the prohibition of discrimination set forth in the European Convention of Human Rights.