India: Increase in animosity against Christians

Three recent attacks against Christians in India reflect an increase in animosity against believers throughout the country.

Just days earlier, Hindu extremists disrupted a prayer service in Pandhi village, Chhattisgarh state. Although the church had reportedly obtained police permission for the event, 15 to 20 extremists interrupted the service on the first day, threatening attendees and slapping one of the pastors.

The next day, 50 extremists tore down the believers’ tent and began assaulting them. One of the pastors required stitches. The extremists returned later that night, beating church members and another pastor with their fists and leather belts. They also damaged a motorbike.

A group of Christians in Haibasa district, Jharkhand state, were forced to leave their village after a series of attacks against them by local villagers. The Christians took refuge at a nearby church and are living without adequate food and clothing. In the final attack on this group, on Jan. 29, a violent mob closed down all exit points to the village before assaulting the Christians with iron rods, axes, arrows and other sharp weapons. The mob severely beat four Christians and dragged others, including children, to a room. They locked the Christians inside and attempted to burn them alive. They were unsuccessful only because police arrived before they could complete the deed.

These are only a few of the attacks against Christians in recent weeks. Hindu groups revile Christians because they think Christians undermine the Hindu caste system. (March 2012 The Voice of the Martyrs)
Source: RescueChristians.Org 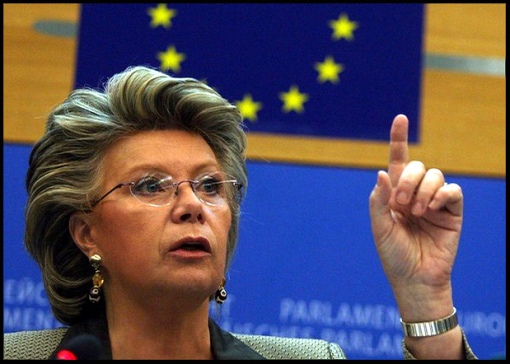 The European Commission will contact the Hungarian authorities for further information about Hungary’s church law and to assess whether it is in conformity with a relevant EU directive, justice commissioner Viviane Reding said in answer to a written question on Wednesday.

The question was submitted by three members of the European Parliamentary delegation of Hungary’s main opposition Socialist Party. It said that Hungary had recently adopted legislation on the right to freedom of conscience and religion and on the legal status of churches, religious denominations and religious communities which, according to the MEPs, “disregards the criterion ‘genuine, legitimate and justified occupational requirement’, as set forth in Directive 2000/78/EC,” and extends the exemption to grounds other than religion and belief, in breach of the directive.

In her written answer, Reding said the Employment Equality Directive prohibits discrimination on grounds of religion or belief, disability, age, or sexual orientation in employment and occupation. She added that under strict conditions, the directive allows “differences of treatment where a particular characteristic related to a ground covered by the Directive is a ‘genuine and determining occupational requirement’ for the job in question.”

Reding said that according to the case-law of the Court of Justice of the European Union, exceptions to the principle of equal treatment have to be interpreted narrowly and member states’ legislation on conditions of recruitment, the termination of the employment relationship and other working conditions must comply with the principle of equal treatment.

“The Commission will contact the Hungarian authorities for further information and to examine whether Hungarian law is in conformity with Directive 2000/78/EC,” she said.

Open Letter to Hungarian Prime Minister Viktor Orban: “NO” to the new law on religions

We, the undersigned, wish to make our voices heard and our concerns expressed with regards to the Hungarian Act CCVI of 2011 on the Right to Freedom of Conscience and Religion and on the Status of Churches, Religions and Religious Communities that restricts religious freedom.

The Act stripped Buddhists, Hindus, Muslims, and hundreds of other religious communities of their church status and forced them to undergo a highly arbitrary procedure should they wish to register as a religion.

The de-registration process will affect the support by religious groups to different communities and activities, including the care for homeless, the elderly, the poor, prisoners and minorities. It will affect amongst other things educational support, the provision of shelter and assistance to those disadvantaged in society as these religious communities will no longer have the proper legal framework from which to operate.

The Hungarian Evangelical Fellowship founded and led by Methodist Pastor Gabor Ivanyi, which provides food and shelter for some thousands of homeless people, lost its church status and is not entitled anymore for state support of its charitable work.

Jai Bhim Buddhist Community which contributes to social integration of young Roma adults and children, not only lost its religious recognition but was subjected to a police raid.

All of this is reminiscent of some long forgotten time and has no place in today’s modern Europe.

On 19 March 2012, the Venice Commission of the Council of Europe published a 15-page Opinion about the new Hungarian Religion Law in which it expressed serious reservations (See http://www.venice.coe.int/docs/2012/CDL-AD(2012)004-e.pdf). It found that retroactively de-registering religious organizations offends international human rights standards. It also found that the Parliamentary vote on registration offends due process, withholds necessary procedural guarantees, and offends the obligation of state neutrality and objectivity. Moreover, it found the national security criteria to be in violation of European Charter of Human Rights and the standards of Organization for Security and Cooperation in Europe.

We hereby call for this legislation to be repealed and religious freedom being protected in the interest of all citizens of Hungary.

Joe Grieboski,
Founder and President of the Institute on Religion & Public Policy

Janos Nagy,
President of the Confederation of Hungarian Small Churches

For more information about the new law on religions in Hungary, please contact

The president of European Union for Progressive Judaism, Leslie Bergman, is continuing the EUPJ’s and the World Union for Progressive Judaism campaign to ensure that the Hungarian government recognizes Sim Shalom and Bet Orim, Budapest’s two Progressive congregations. In recent meetings with Hungarian authorities, an EUPJ/WUPJ delegation headed by EUPJ President Leslie Bergman and WUPJ President Rabbi Stephen Fuchs indicated in the strongest terms that nothing less than “full unreserved recognition and first class status would be acceptable.”

Under recently passed legislation by the country’s center-right government, religious institutions are subject to government grading, which impacts the degree of public funding they receive. While the Orthodox community has been granted first class status, Progressive Judaism was only granted second class status.

The delegation also met with the leaders of MAZSIHISZ, the state recognized Jewish organization which has effectively had a monopoly over recognition and major funding, and which refused Sim Shalom membership some years ago.

Intensive meetings with the leaders of our two communities and their rabbis led to increased cooperation between them, creating a catalyst for the formation of an umbrella Hungarian Progressive Jewish Association.

An amazing beam of light shines across the dome above what is considered to be the place where Jesus was crucified, in the Church of the Holy Sepulchre in Jerusalem. The air is filled with smoke from incense and candles.  Photo by: Neil Aderney.

ASSOCIATED PRESS, JERUSALEM – Thousands of Christians gathered near Jerusalem’s Church of the Holy Sepulcher for Easter Saturday and marched in processions brimming with tradition, taking turns to pray in the site where they believe Jesus was slain and buried.

Easter Saturday is a day of reflection and waiting for many Christians, who believe Jesus was crucified on Friday and rose from the dead on Sunday. “This day is very important for us. It’s the waiting for the great celebration of the resurrection,” said Father Ibrahim Shomali, a Palestinian Christian priest from the nearby town of Beit Jala.

They were led by Palestinian guards in black costumes richly embroidered with gold, topped with scarlet rimless hats. They rhythmically pounded their staffs on the cobble-stone ground, providing a beat for believers to march. The guards, “Qawwasin” in Arabic or “Marksmen” in English, are a leftover vestige from when Ottoman Muslims ruled the Holy Land, Father Shomali said.

According to a series of traditions established over hundreds of years of accommodation between different Christian sects and the region’s ever-changing rulers, the Qawwasin march at the head of the Easter Saturday procession. Their job was formerly to protect Jerusalem’s Catholic patriarch. Now, it is a ceremonial role.

They were followed by Franciscan monks in plain brown robes, clerics in black garb, and then ordinary believers. 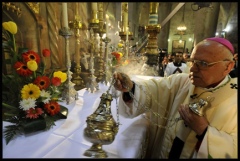 The believers congregated in the Holy Sepulcher for prayer, where many Christians believe was built on the site where Jesus was crucified and buried. “This is the place where Jesus is in his tomb, this is the place, a magnet of the world,” said worshipper Jim Carnie of New York City, New York. “The power of this place, to be here, it has to be experienced,” he said.

The Holy Sepulcher is a complex of cave-like rooms, winding corridors, a soaring domed roof, and ornate decorations alongside broken furniture. Different, often rival, Christian sects control different parts of the Sepulcher, and they have been unable to agree on maintenance and upkeep in some areas.

Catholic and Protestant groups that observe the Gregorian calendar took turns praying in the Holy Sepulcher on Saturday.

Eastern Orthodox churches and others who follow the older Julian calendar will mark Easter a week from now.

Passover: Commemorating the story of the Exodus

Passover, or Pesach in Hebrew, is one of the most widely observed Jewish holidays. It commemorates the story of the Exodus, in which the ancient Israelites were freed from slavery in Egypt. Passover begins in spring, on the 15th day of the Jeweish month of Nisan and is celebrated for seven or eight days. This year the Passover begins on April 7.

In the narrative of the Exodus, the Torah (Old Testament) tells about God helping the Children of Israel to escape from slavery in Egypt. When the Pharaoh freed the Israelites, it is said that they left in such a hurry that they could not wait for bread dough to rise (leaven). In commemoration, for the duration of Passover no leavened bread is eaten, for which reason it is called “The Festival of the Unleavened Bread”. Matzo (flat unleavened bread) is a symbol of the holiday.

It is traditional for Jewish families to gather on the first night of Passover (first two nights in communities outside the land of Israel) for a special dinner called seder (derived from the Hebrew word for “order”, referring to the very specific order of the ritual). The table is set with the finest china and silverware to reflect the importance of the meal. During this meal, the story of the Exodus from Egypt is retold using a special text called the Haggadah. Four cups of wine are consumed at various stages in the narrative.

In the name of Central-European Religious Freedom Institute, I wish Chag Sameach to all Jewish people.

Tibet’s Buddhist leader the Dalai Lama has won the 2012 Templeton Prize worth US$1.7-million for his work affirming the spiritual dimension of life, the U.S.-based John Templeton Foundation said on Thursday.

The spiritual leader “vigorously focused on the connections between the investigative traditions of science and Buddhism as a way to better understand and advance what both disciplines might offer the world”, the foundation said in a statement.

Specifically, he encourages serious scientific investigative reviews of the power of compassion and its broad potential to address the world’s fundamental problems – a theme at the core of his teachings and a cornerstone of his immense popularity.

Within that search, the “big questions” he raises – such as “Can compassion be trained or taught?” – reflect the deep interest of the founder of the Templeton Prize, the late Sir John Templeton, in seeking to bring scientific methods to the study of spiritual claims and thus foster the spiritual progress that the Prize has recognized for the past 40 years.