The Hungarian Society for Krishna Consciousness is the main representative of the Hindu world religion in Hungary. The Krishna devotees are known for their diligent religious practices, dedicated distribution of eternal spiritual wisdom and pure, exemplary lifestyles. Their efforts and achievements in assisting underprivileged people, as well as in fighting environmental problems and promoting sustainability, are also well known and valued worldwide.

Recent Hungarian law on churches threatened their religious status and put a question mark over the future of their agricultural land in Hungary, known as Krishna-valley. Hungarian law on arable land says only the State, churches and individuals have right to own arable land. If Krishna community would lose its religious status due to new draconian law on churches, their 270-hectare farm – a home to 300 monks and sacred cows – might become State property overnight. 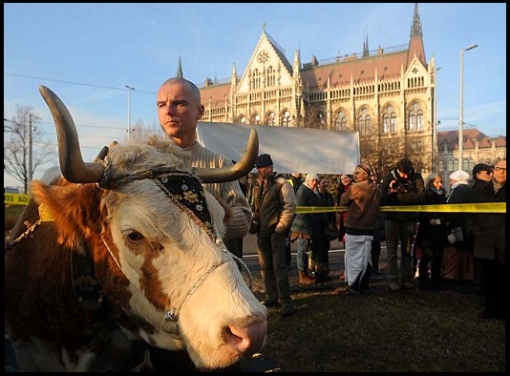 On the 13th of December, they held a peaceful demonstration with their homeless-to-be cows, monks and families in front of the Hungarian Parliament. Also, to make their case stronger, they issued a petition, which was signed by tens of thousand people from all over the world in a matter of days.

Indian government officials, businessmen, as well as international Hindu organizations in Europe, the United States and the United Kingdom have expressed their concern about the issue at the Hungarian Embassies in their respective countries, as well as by sending letters directly to Prime Minister Viktor Orban:

“We are deeply disappointed that Hungary, whose ardent desire for true democracy the whole world could witness and admire over twenty years ago, now is making the mistake of not protecting its citizens` equality  — and discriminates against internationally respected religious organizations.” – Hindu Forum of Europe

“The global efforts of International Society for Krishna Consciousness we represented as faith based best practices, at a recent Hindu American Seva (service) conference at the White House. Their efforts and achievements in fighting environmental problems and promoting sustainability are also well-known and valued worldwide. Their Krishna-Valley farm has brought hundreds of thousands of tourists and more international recognition for Hungary.” – Hindu American Seva Charities

“On behalf of Hindu Forum of Britain we are requesting that you, Mr. Prime Minister, and the Parliament of Hungary rectify this situation as soon as possible. We are especially urging the Hungarian Parliament to re-establish the church status of all Hindu Groups in Hungary. Including the Society for Krishna Consciousness, which is a part of the 5000 year old Hindu Faith and a representative of the Gaudia Vaishnava Tradition.” – Hindu Forum of Britain

“On behalf of the Hindu community, we are respectfully requesting that this situation is rectified as soon as possible by repealing the legislation or amending its discriminatory provisions. We are fully convinced that the Hungarian Society for Krishna Consciousness is worthy of all your support, as it is a tremendous asset not only to the Hungarian people, but also to the international community.” - Hindu American Foundation

With their non-confrontational, peace loving ways, Hungarian Krishna community is setting a good example in protecting religious freedom in Hungary.

All great theories of Civics teaches us Human being is a social being, But Krishna showing it. Tomorrow will be the world of Krishna.
Jaya Jaya Rama!
Jaya Jaya Krishna!